We develop state-of-the-art materials and technologies for solving biomedical problems. Examples include conductive materials with the capability of utilization as sensor and actuator in human body as well as scaffolds that aid in engineering of cardiac tissues and their differentiation from stem cells.

Biocompatible, electrically conductive microfibers with superior mechanical properties have received great attention due to their potential applications in various biomedical applications such as implantable medical devices, biosensors, artificial muscles, and microactuators. Here, we developed an electrically conductive and mechanically stable carbon nanotube-based microactuator with low degradability that makes it usable for an implantable device in the body or biological environments. The microfiber was composed of hyaluronic acid (HA) hydrogel and single-wall carbon nanotubes (SWCNTs) (HA/SWCNT). HA hydrogel acts as bio-surfactant and ion-conducting binder to improve the dispersion of SWCNTs resulting in enhanced electrical and mechanical properties of the hybrid microfiber. In addition, HA was crosslinked to prevent leaking of the nanotubes from the composite. Crosslinking of HA hydrogel significantly enhances Young’s modulus, failure strain, toughness, stability of electrical conductivity, and resistance to degradability and creep of hybrid microfibers. The obtained crosslinked HA/SWCNT hybrid microfibers show excellent capacitance, and actuation behavior under mechanical loading with the low potential of ±1 V in a biological environment. Furthermore, the HA/SWCNT microfibers exhibits excellent in vitro viability. In vivo biocompatibility is also shown through the resolution of early inflammatory response in less than three weeks after implantation of the microfibers in subcutaneous tissue of mice.

Producing mature and functional cardiomyocytes (CMs) by in vitro differentiation of induced pluripotent stem cells (iPSCs) using only biochemical cues is challenging. To mimic the biophysical and biomechanical complexity of the native in vivo environment during the differentiation and maturation process, polydimethylsiloxane substrates with 3D topography at the micrometer and sub‐micrometer levels are developed and used as cell‐culture substrates. The results show that while cylindrical patterns on the substrates resembling mature CMs enhance the maturation of iPSC‐derived CMs, sub‐micrometer‐level topographical features derived by imprinting primary human CMs further accelerate both the differentiation and maturation processes. The resulting CMs exhibit a more‐mature phenotype than control groups—as confirmed by quantitative polymerase chain reaction, flow cytometry, and the magnitude of beating signals—and possess the shape and orientation of mature CMs in human myocardium—as revealed by fluorescence microscopy, Ca2+ flow direction, and mitochondrial distribution. The experiments, combined with a virtual cell model, show that the physico‐mechanical cues generated by these 3D‐patterned substrates improve the phenotype of the CMs via the reorganization of the cytoskeletal network and the regulation of chromatin conformation. 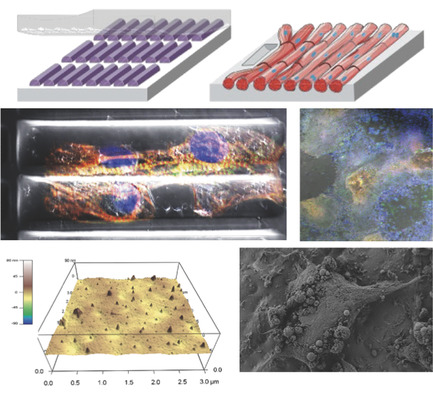 Indentation of CNT Forests: Effects of Morphology on the Mechanical Behavior

Microscale indentation of carbon nanotube (CNT) forests on Si substrates was performed using a rectangular-shaped, flat punch indenter inside of a scanning electron microscope (SEM) enabling visualization of the deformation process. We find that the location of incipient deformation varies significantly by changing the CNT growth parameters. We find that all CNT forests undergo an initial instability manifested as the formation of a buckle. These local buckles that determine a major part of the deformation mechanism of CNT forests form at the location of the best combination of low density and less tortuous CNTs along the height. These new insights are critical in the design of CNT forests for a variety of applications where mechanical or contact behavior is important.

The mechanical behavior of carbon nanotube (CNT) forests soaked in three solvents – toluene, acetonitrile, and isopropanol – is examined. Effective stiffness of the structure is evaluated in the dry and wet condition by micro-indentation using a 100 µm flat punch. With soaking of CNT forests in solvents, the stiffness decreases and deformation mechanism changes from buckling concentrated close to the bottom of the CNT forest to a distribution of local buckles along the height and global buckling of the entire length of CNTs. We use molecular dynamics simulations to relate the experimental observations to the reduced mechanical support from neighbor CNTs due to a decreased magnitude of van der Waals (vdW) interactions in the presence of solvents. Toluene, which produces the lowest average measured stiffness between the three solvents, produces the lowest vdW forces between individual CNTs. Furthermore, wet-dry cycling of CNT forests shows the reversibility and repeatability of change of stiffness by immersing in solvents. The results show that soaking CNT forests in solvents could be useful for applications such as interface materials where lower stiffness of CNT forests are needed and applications such as energy absorbing materials in which re-setting of stiffness is required.

The deformation mechanism and mechanical properties of carbon nanotube (CNT) forests conformally coated with alumina using atomic layer deposition (ALD) are investigated using in situ and ex situ microindentation. While microindentation of a CNT forest coated with a thin discontinuous layer using 20 ALD cycles results in a deformation response similar to the response of uncoated CNT forests, a similar test on a CNT forest coated with a sufficiently thick and continuous layer using 100 ALD cycles causes fracture of both the alumina coatings and the core CNTs. With a 10 nm coating, 4-fold and 14-fold stiffness increases are measured with using a flat punch and a Berkovich tip, respectively. Indentation testing with the Berkovich tip also reveals increased recoverability at relatively low strains. The results show that ALD coated CNT forests could be useful for applications that require higher stiffness or recoverability. Also, fracturing of the nanotubes shows that upper limits exist in loading of conformally-coated CNT forests.

Macro-compression experiments of as-grown CNT forests and micro-compression experiments of Al coated CNT forests display loss of interfacial cohesion at sufficient deformation. In macroscale compression of as-grown CNT forests, localized delamination initiates under nominal pressure as low as 50 kPa. The mechanism for delamination under macro-compression may be explained by the development of local stress concentrations within the film, which imposes a local tensile load that is sufficiently high to overcome the adhesion strength between CNTs and the substrate. These local stress inhomogeneities are likely a result of the height variation at the CNT forest surface and the van der Waals interactions between CNTs. In the case of micro-scale indentation of the CNT forest coated with a 1 μm-thick Al film, the rigid constraint formed as a result of the applied metal coating is responsible for the delamination. Simple analytical beam bending theory estimates the magnitude of the tensile stress to be on the same order of magnitude as the measured CNT-substrate adhesion strength, 0.4–0.8 MPa. These findings demonstrate that tuning the mechanical boundary constraints provides an important design parameter for attaining greater reliability in devices and materials that utilize CNT forests.

Owing to their high thermal conductivity and high conformability to rough surfaces, thin foils with carbon nanotube (CNT) forests synthesized on both sides of them as thermal interface materials (TIMs) have relatively low thermal resistance. In this work, a finite element model (FEM) of the foil-supported CNT structure that captures the nonlinearity and permanent deformations of the materials was used to simulate deformation of these composite structures under pressure in contact with surfaces of different roughness. We investigate methods to improve properties of the foil-supported CNT forests to fit different applications.